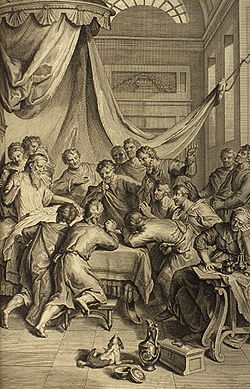 I came across a brilliant verse today while catching up from missing the end of Genesis over the weekend. At least to me it was brilliant because there was a depth that was contained in the sentiment. I don\’t aim to preach, but to encourage you with the life of Jacob. When we examine his life and journey, the sentiment found in this verse will become refreshingly apparent.

\”When Jacob had finished giving instructions to his sons, he drew his feet up into the bed, breathed his last and was gathered to his people.\” – Genesis 49:33

See what I mean? How powerful is that verse! When I read that, in my mind I pictured an old man (147 years old) who \”dies with a smile on his face\”. That may seem morbid to you, but the truth is that he has lived a life of reconciliation throughout and ends his days in the sheer satisfaction of the accomplishment of it. From the very beginning of his days, he has been labeled a deceiver. His name means \”one who grabs the heel\” and is a reference to someone who is deceptive; names carry character traits with them in scripture. He lives this out in true fashion, as he cons his brother Esau out of his birthright and then goes along with his mothers plan to deceptively give him the blessing intended for the firstborn. Fleeing for his life, he winds up in Bethel where he comes into contact with God in a dream that has been called \”Jacob\’s Ladder\”. It is there that he is reconciled through covenanted blessing that flowed to him from his Father\’s Abraham and Isaac. God blesses Jacob throughout the years of his servitude for his Uncle Laban, who cheated him ten times on his wages and gave him two wives and two concubinage wives that gave him a total of 10 kids! When he finally departed to return home, he is reconciled to his brother Esau after fearing he might kill him. Desperate to save himself, he was willing to part with all his servants and possessions in order to \”buy\” Esau\’s forgiveness. But God had other plans to restore his family relationships. Years later, his sons pull a deceptive trick in selling the beloved son Joseph to slave traders headed for Egypt. They mask their deception by pretending Joseph had been killed by a lion. For years he lived mourning for a son he thought was dead. OF course we know that in the end Joseph becomes the Savior of the family and he is restored to relationship with Jacob. Not only this but Jacob receives Joseph\’s sons as his own and they with their uncles become the founding Fathers of the Twelve Tribes of Israel.

Jacob has seen God come through for him time and time again. He has learned to trust God even in what he couldn\’t see, knowing that in time God would restore things to the way that they should be. In his case that was family restoration as well as covenant restoration through him too! There is no doubt that he too knew of the 400 years that his children would be captive in Israel, and he knew of the promise that God would bring them out of that captivity. He was assured by faith that God was able to perform what he said He would do, just like his fathers before him. Surrounded by his sons, all who had been reconciled to him through forgiveness and God\’s sovereign plan from the beginning is how he is seen at the end of his life. He was buried in the field bought by the Father of Faith, the cave being a hall of the victorious. He was buried there with his wife Leah, who was also a picture of reconciliation in that she was seemingly despised and yet she is buried with His Father\’s an important piece to the story of redemptive living.

So with all that confidence, with all the blessings of reconciliation and covenant, knowing that he had lived a lively adventure that by God\’s Grace was filled with Victory after every setback. He relaxes, takes a breath to memorialize it all and enters Abraham\’s Bosom no longer the deceiver (Jacob), but the prince (Israel) who walked in faithful reconciliation. That is the way to go home!